So far we have looked at geometry, transformations, projections. Those are all done in the vertex shader. Our examples have been white wireframes of the geometry. Now we will proceed to fragment shader, where the geometry has been rasterized and we can calculate the color our pixels should have. This is the main job of the fragment shader - to give out a color value for a pixel. In OpenGL the fragment shader gets, among other values, the gl_FragCoord value as input. This value is the coordinate in the screen space (also called window space).

Usually with basic 3D geometry we do not care that much about the screen space coordinate. Rather we are interested in values sent directly or interpolated from the vertex shader. This is because with vertices we can also send a color value and / or a surface normal from our program code. We do not know how many pixels are rasterized between the vertices, but we can interpolate values between them.

There are different techniques on how to assign a color to the rasterized pixels. In this chapter we will take a look at those techniques and see the differences between them.

This is the most simple and efficient way to specify color for an object. It defines a single color for a face. Implementations of it may vary, but the main idea is that we use only one surface normal per polygon. The color itself is uniform (unchanging) on that polygon.

This was invented as an improvement to allow for more smooth transitions of the color on round objects. Main idea is that there is a different normal per vertex and the color is calculated in the vertex shader. That color is then interpolated over the polygon. Because there are less vertices then there are fragments, then calculating the color per vertex and interpolating it, is more efficient than calculating it per fragment.
This approach handles badly materials that have a specular reflection. This reflection might occur inside the polygon, but not on any of the vertices. Thus this shading would not show it, if it does not happen to be on the vertex.

On the right there is an example with all three shadings. Those shapes have only the diffuse reflection (no specular). As you can see there are still quite noticeable differences with the sphere. For the cube, there are actually 24 vertices. Each face has its own 4 with normals pointing to the same direction as the surface normal. In that case there is no difference (as far as the result is concerned) which shading is used.

Next we will look how is the actual color determined. It does not matter which shading is used as long as we have a surface normal, material properties, light source properties and the light direction.

Before we look at the actual reflection of light from a surface, let us define a type of light source. Directional light source is a light source, that defines the light coming from a single direction. This is an approximation of reality, because it would assume an existence of an infinitely wide and tall object that emits light. Still, we are quite used to think of sunlight as directional light. The Sun is so big compared to earth, that in a visible area the angles of rays do not differ a noticeable amount. 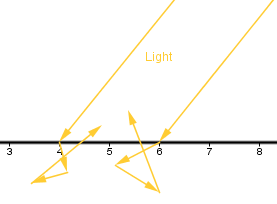 Now, we are given a direction from where the light is coming from and some sort of a surface. Diffuse surfaces have the property to diffuse reflected light around. Light will enter the surface, bounce around there and then exit in a random direction. Or you can think that an atom will absorb the photon and after some time emits another photon to a different direction. Because of the diffusion of light, it does not matter at which angle we look at the material. All that matters is on which angle the light actually reaches the material.

As you can see, the amount of light received and thus reflected is directly related to the angle between the surface and the light direction.

Now, does this mean that we would have to calculate the cosine in the fragment shader? Would that not be quite slow?

Luckily we can calculate the cosine in another way. As you remember the dot product was geometrically defined as:

but there is another, an algebraic definition for it:

If we are dealing with normalized vectors, then we can directly find out the cosine between them by just taking the algebraic dot product. So, we have to make sure our surface normal and the light source direction are normalized. Another think to notice is, that because the cosine is negative for larger angles, we want to use only the positive values of the cosine. Otherwise we would subtract the light, if the light source is on the other side of the material. This becomes even more important when we add other terms to the equation.

This is the main idea behind the Lambert lighting model that models the diffuse reflection of light. Now, in order to determine the actual color, we need to know two things:

In computer graphics we usually define our colors by three channels: red, green and blue. So we will have 3 terms for each of those channels for both the light source and the surface material. The final color computed in the fragment shader would be like this:

In reality there are very few surfaces that are almost completely diffusely reflective. Examples would include the surface of the Moon, chalk, matte paper.

This model is the one used in the example in the Shading Models paragraph.

The cubes and spheres shown before kind of appear to be in space. The non-illuminated sides of it are totally in darkness. In reality this is not the case, there is almost always some light coming from every direction. That is because light will reflect from nearby surfaces, bounce around and reaches the area not directly illuminated. 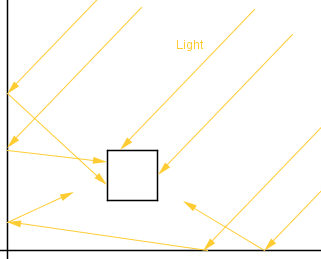 This is called indirect illumination and is one of the things that global illumination techniques try to do accurately, which may be computationally quite expensive. In our simple model we can do a very rough approximation and just add an ambient term to the reflected intensity. That way the non-illuminated areas will not be totally black. Although this means that the other parts will become a bit more illuminated also.

Now, you might notice that this might cause the intensity to be above 1. Because of that the values are usually clamped to be in the range $[0, 1]$. The clamp operation makes the values above maximum be the maximum, values below minimum to be the minimum. Often times if you assign a value higher than 1 to the pixel's color in code, the output will still be the same as if it were 1.

On the right there is an example with a cube and a sphere that has the ambient term added in the lighting model.

You can see that the non-illuminated area of the cube is now visible. The intensity will only start to change when the side becomes directly illuminated.

As mentioned before, there are very few surfaces that are only diffusely reflective. Most surfaces have an amount of specular reflection. This means that some part of the incoming light will reflect in the reflected direction. If the viewer is looking from that direction, the area of the surface will seem lighter than the rest of the surface. 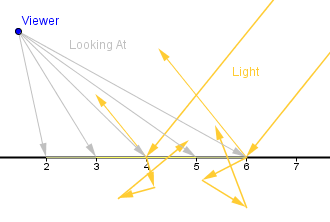 Notice that the viewer's position is the same. The viewer might look at different parts of the surface, viewer sees the specular reflection in only the area where the reflected light would be shining directly towards the viewer.

In reality we would have to take into account also the reflected indirect light, but for a simple model we account only for the direct light. This will produce a specular highlight that is sort of a reflection of the light source.

But how to calculate that? Let us have a more concise drawing in order to find that out. 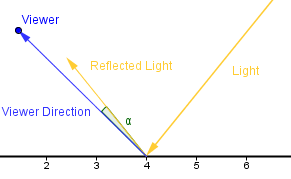 So, we need a some kind of way to illuminate based on the angle between the viewer direction and the reflected light. Bui Tuong Phong thought in 1975 that a good enough approximation would be to use the cosine of that angle. Assuming that the vectors are normalized, we can find the cosine by just taking the dot product again. If the vectors are not normalized, then we have to normalize them first.

Now, the cosine function is 1, when the angle is 0. It is also symmetric and becomes 0 when the angle is at 90°. We already saw a good use of that in the diffuse reflection case. However, because the cosine decreases so slowly, it would produce a really big and spread out highlight on the surface. Phong proposed to take a power of the cosine. Taking the power causes the cosine to decrease more rapidly, while still preserving the value 1 at 0 and the overall shape. The exact value of the power is left to the programmer and is called the shininess value.

So the overall formula would be:

This is the Phong's lighting model. It includes the ambient term, Lambertian / diffuse term and the Phong's specular term. There are 2 colors for each of those terms: color of the light and the material. So all and all 6 colors. There are also 4 vectors that indicate directions towards: surface normal; light; reflected light; viewer. Those vectors should all be normalized.

As for the behavior of the Phong's specular highlight, consider the example on the right. You can see that when the shininess is 1, then the specular highlight is really big and does not look good. You can also see that it might not be a good idea to use the same color for the specular reflection as the diffuse color. A white specular reflection color gives a more pleasing result. The color slides linearly interpolate between red (left) and white (right).

Another, a bit more realistic, lighting model is the Blinn-Phong model that calculates the specular term somewhat differently. 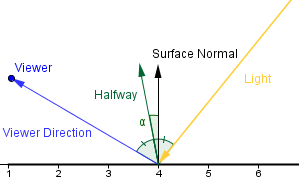 In Blinn-Phong model we are using a halfway vector between the light source and the viewer. This vector will coincide with the surface normal if the reflected light coincides with the viewer direction.

Everything else is the same, but we are now using the cosine of the angle between the halfway vector and the surface normal. The shininess exponent of this is about 4 times times bigger than in Phong's model for roughly the same sized highlight.

Also the highlight will behave a bit differently, when the viewer is looking at a grazing angle towards the surface. The highlight will be more oval-shaped, thus projected circularly, rather than being circular and projected as an oval. This is more realistic (see page 5 for explanation).

You can try this out in the example on the right. First pick a good shininess value and then try to rotate the light's direction. The left sphere has Phong's specular and the right one has the Blinn-Phong specular.

This kind of optimization could not be done with the Phong's model, because the reflected light would have been in a different direction all the time and we have to recalculate it for each fragment. Alas it will only work here if the light source and viewer are considered to be in infinity (e.g. directional light, orthographic projection).